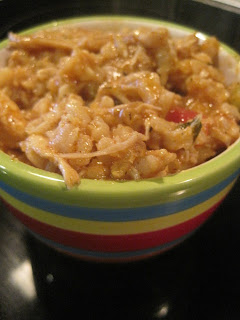 The annual kickoff to Mardi Gras is a bittersweet one for us this year. A year ago, we were invited to our first Carolyn Schutte bash; a Mardi Gras party I recounted on this blog. It was a classic bash, alive with New Orleans music and fabulous Cajun food that was largely prepared by Carolyn's husband. Now, a year later, Carolyn continues her struggle to recover from a traumatic brain injury. We await word on Carolyn's transfer to the New Jersey facility that is considered her best shot at recovery, as it is considered one of the best in the country for treating this type of brain injury.

So, no parties this year, despite the fact that KC will be putting on the Fat Tuesday dog. I have to work, so no hoopla, but I had to get a little taste of Mardi Gras. I have always wanted to make a steaming pot of Creole jambalaya and so, I did, accepting that it would probably pale in comparison to Jim's. I was also trying to do a budgetary version, so I skipped the shrimp and just made it with chicken and sausage. 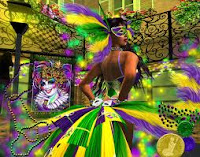 Otherwise, I followed Emeril's recipe. Even though I've been trying to make healthier versions of dishes lately and had indeed read that I could make jambalaya with turkey sausage instead...

Yes, that's my less than sophisticated response to using turkey sausage. I didn't wait this long to make jambalaya only to make it with turkey sausage. Not when I can indulge in...

AHN-DWEE, BABY! That's right, I had to go with that deliciously spicy, traditional Andouille sausage so known for its popularity in Cajun dishes. I did however substitute brown rice for 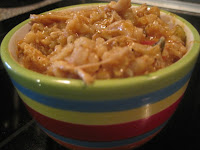 white and while that made for adjustments for rice cooking time, it added depth to the jambalaya flavor. Yes, its clear why Emeril's jambalaya was rated five stars by over 150 users on the Food Network site...um, other than the fact he's a New Orleans native and acclaimed chef famous for his Cajun food...it was a hearty, spicy, soul-warming treat. It also had that quality I've been looking for this winter: it made enough to feed me for a week. You can find the recipe here.

I miss the party, sure, but the taste of the jambalaya brings a goofy grin to my face while it lifts the chill from the bones. I am hopeful for a Mardi Gras party next year with Carolyn again. Happy Fat Tuesday, everybody.
Email Post
Labels: Cajun recipes 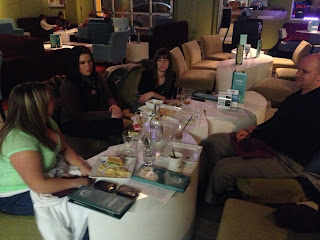